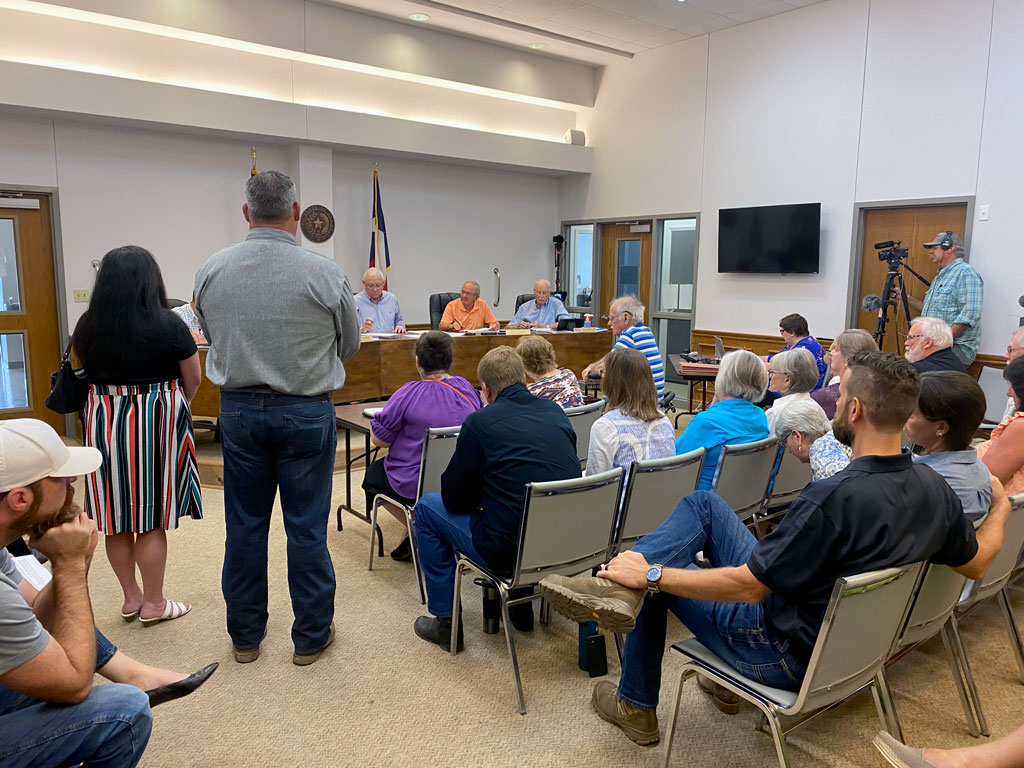 The justice of the peace courtroom where the Llano County Court of Commissioners holds its regular meeting was packed again on May 9 due to two agenda items dealing with the Llano County library system. A videographer from a documentary film crew (right) recorded the meeting in response to what some call censorship. Staff photo by Dakota Morrissiey

The two library-centric agenda items drew a standing crowd to the meeting. One vote was to change the system’s e-book provider to OverDrive’s Biblioteca. The second was to immediately make the Biblioteca available to users of the the three system libraries: Llano County Library in Llano, Kingsland Branch Library in Kingsland and Lakeshore Branch Library in Buchanan Dam.

Supporters of staying with OverDrive, which has been the county’s e-book provider for more than 10 years, told commissioners at an earlier meeting that Biblioteca is not available on e-ink readers like Kindle Paperwhite, which that the library should check. . The library had to purchase Kindle Fires for the new service. Those who want the switch to Biblioteca told curators that OverDrive doesn’t offer a way to filter material for younger readers.

A federal lawsuit was recently filed against Llano County officials and certain members of the library advisory board, citing concerns that a recent decision to remove access to several books from the Llano County library system constitutes a violation of the First and Fourteenth Amendments. The issue of censorship in the library system, the firing of Kingsland’s chief librarian, and the lawsuit received national attention from multiple media outlets, including The Washington Post, Texas Tribune, CNN, and NPR.

A documentary film crew following licensed librarian Suzette Baker recorded the meeting. According to Baker, the censored books go beyond accusations of “pornography” and encompass anything the library’s advisory board deems inappropriate.

During the meeting, several Llano County residents raised concerns about what they said was potentially disturbing material made available to children in the county’s library system.

“There have been a lot of developmentally inappropriate books when it comes to sex, especially with graphic images and illustrations and content in an under 10 section,” said Lynsi Heron, a mother. of Llano County who reported having a master’s degree in early childhood. education.

Heron and her husband, Jason, were two of 11 residents who spoke at the meeting. All speakers shared the concern that children have access to pornographic material through county public libraries.

Two of the books in question are “Gender Queer” by Maia Kobabe and “It’s Perfectly Normal” by Robie H. Harris. Footage of “Gender Queer” was distributed to commissioners by Llano County resident Wayne Shipley, who said he was able to access the material through OverDrive.

“I wasn’t challenged at all about who I was or how old I was,” Shipley said in reference to the ease of access to the e-book service.

Representatives of the group that sued the county over its new library policies were present but did not speak. Baker explained that the opposition often doesn’t speak because meetings can get rowdy.

“It’s too much drama, it’s a lot of drama, it really is,” she said. “And there is a court (of law) that will look into this thoroughly and decide what is appropriate and what is inappropriate.”